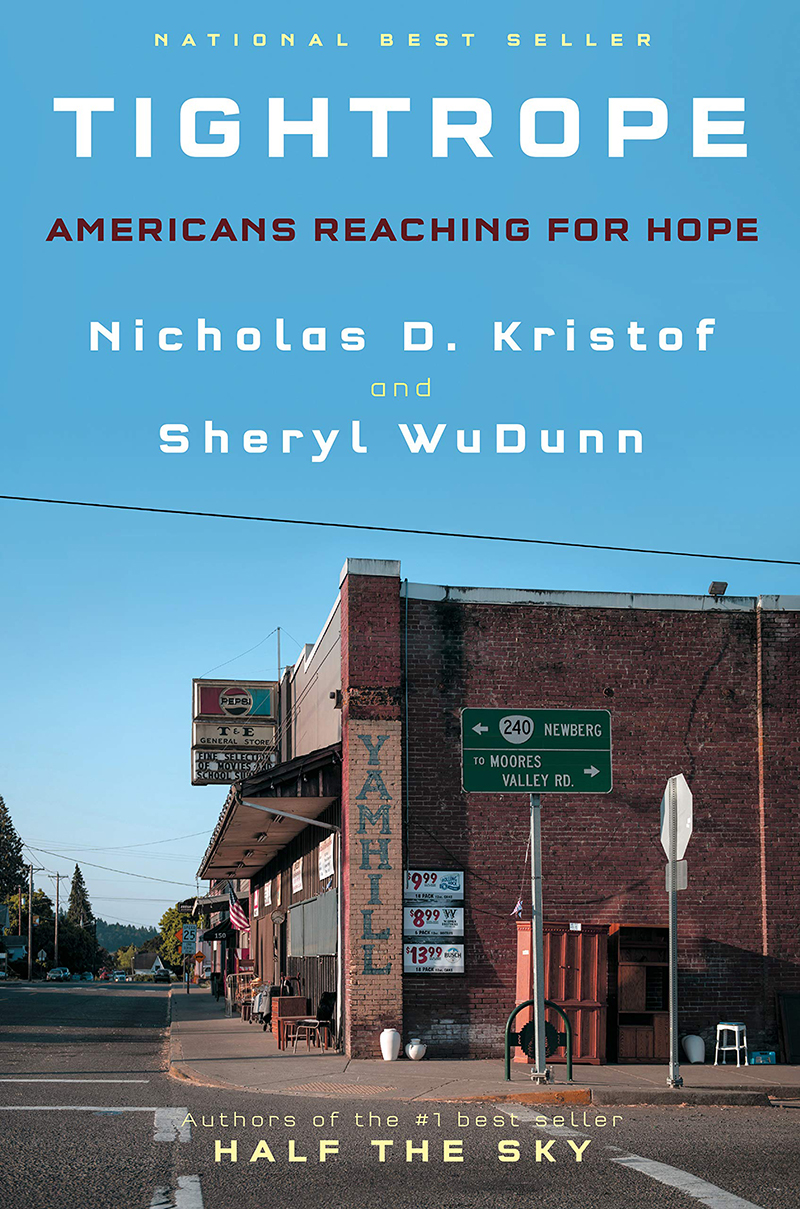 Krisof and WuDunn are married, and this couple examine the epidemic of depression, unemployment, poverty, and addiction that is plaguing the working class across America – and the government’s failure to address it.

Tightrope has been #2 on the New York Times bestseller list.

Tightrope immediately catches your attention with a story about Dee Knapp, an Oregon woman, who is awakened by her drunken husband, who demands that she make him dinner. She’s not moving fast enough for him, so her husband punches her, then chases her out of the house with a rifle. She hides in the fields around their house, hoping her husband doesn’t hurt any of their five children.

Nicolas Kristof knew this family from his childhood and in the book, we see where they end up. The stories of these children growing up are sad, some burning to death, others involved with drugs and one HIV.

Kristof and WuDunn, follow several of Kristof’s ex-schoolmates with whom he grew up near Yamhill, Ore. “About one-fourth of the kids who rode with Nick on the bus are dead from drugs, suicide, alcohol, obesity, reckless accidents and other pathologies.” The book looks at how millions of people suffer because of loss of jobs, dignity, lives, hopes and children. They examine a host of issues, including unemployment, health care, substance use disorders and the prison system.

Later the authors go east to Baltimore and found many of the same problems they encountered in Yamhill. They met a veteran injured in Afghanistan, which led to drug addiction after the doctors prescribed oxycodone. He lost his family and ended up in jail.

“The government failed him, blamed him and jailed him,” Kristof and WuDunn write. “A couple of generations ago, the United States rewarded veterans by affording them education and housing benefits. More recently, the United States helped get veterans hooked on drugs and then incarcerated them.” The authors express the anger they feel over the failures of the government.

The authors offer a host of proposed solutions, including the expansion of social programs, treatment instead of prison for drug offenders, universal health care and more early-childhood programs. The book ends, helpfully, with an appendix listing several suggestions for how people can make a difference in their own communities: volunteering at a homeless shelter, or boycotting companies that don’t pay their employees a living wage.

The stories are difficult. Our childcare agencies often have children very much like those written about in the book. Tightrope helps us understand why children often act the way they do. Reading this book opened my eyes to huge problems that are everywhere in our country.